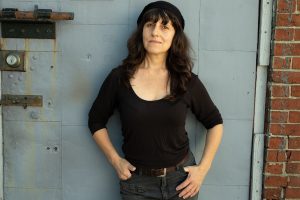 Nora Valdez is an international award-winning sculptor from Argentina working and exhibiting since 1977. In 1982 she graduated with the title of Professor of Fine Art in San Luis, Argentina. In 1984 she moved to Perugia Italy where she further developed and exhibited her work. In 1985 she started working in marble in Zaragoza, Spain, in a studio funded by the city of Zaragoza. In 1986 she moved to Boston MA, where she lives now.

Her work has been exhibited and installed in permanent public spaces in Europe, Asia, North and South America and many states in the USA.

She is best known as a stone carver. She uses sculpture and installations to create images that reflect on the nature of change, the life of the individual, and the forces that buffet our souls. For the past years her work has focused on the nature of home and the immigrant experience, recreating in her art the hard road of those caught within alien systems seeking the rootedness of home. Valdez sculpts the human figure and related objects in symbolic narratives, often informed by her dreams. Her thematic concerns are also reflected in her involvement with the community.

Valdez is the recipient of many awards, and has been funded nationally and internationally. Since 2012 she is a member of the Boston Sculptors Gallery and an Advisor and Professor at the Carving Studio and Sculpture Center in VT since 2006.